The intended use case for Flows for APEX is that all of your database activities (inserts, updates, deletes) that make up a process step, and all of the Flow engine work required to facilitate a process step - all occur together in a single database transaction. This means that the entire process step is committed into the database, or is rolled back if something interrupts processing. 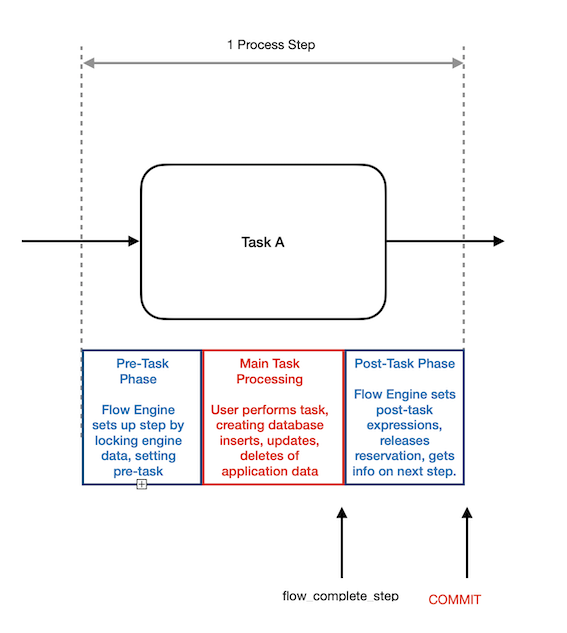 If the step was completed successfully, the engine then moves into the Pre-Task Phase of the next step.

Other object types, such as gateways, sub processes, and events, cause their own step transactions to occur, as appropriate. As examples:

A Detailed Look at What Happens on a flow_complete_step.

Let’s look in detail at what happens at a very simple 3-step process for processing vacation requests.

When the Process Instance starts, it moves forward to Step A, which requires the user to complete a form. Task A is asynchronous, in that user task A waits for user input and for the user to complete the task before proceeding. The next diagram shows a very simplified view of the transactions that the APEX forms and the PL/SQL script might be using to update the database, along with the points at which these might be committed to the database - the transaction boundaries.

Going from Step A to Step B

Let’s look in detail at what happens from the point where the user is completing a form in APEX to apply for their vacation, and we are using Flows for APEX to control the process flow.

We start with the user working on her vacation application, part of Step A, which she is doing by completing an APEX form page.

The Process is now on step B.

Flows for APEX performs the Pre-Task Phase operations for Step B. These include:

Step B is another asynchronous process step, requiring a user to pick up the task, enter some data in an APEX page, and submit it. So after completing the Pre-Step Phase tasks, the call to ‘flow_complete_step’ made by the user in Step A is now finally complete.

Now it has completed Page Processing, APEX issues a commit. This commits the Pre-Phase Tasks for Step B. The URL for UserTask B is now available in the Task Inbox.

Going from Step B to Step C to the End Event

Continuing our example, the user is now working on a Step B, which results in some database updates being created as part of the userTask on Process Step B.

This time, the activities performed by flow_complete_step are different, because the next step in the process, Step C, is a script Task which is run *synchronously *by the flow engine. So is the step after this, the End Event.

As Step B was an asynchronous step, the Pre-Step Tasks were performed and committed before the User started to work on the Step itself.

The User does step B, and submits the APEX page to the APEX Engine, which:

Flows for APEX will then:

Flows for APEX then moves to Step C, and:

The End Event is now the current step. So:

Our call to flow_complete_step made in the Step B now returns to the user application, and APEX commits the End Event processing.

Errors occur for a variety of reasons, that can include:

Problems to Avoid in Your Application 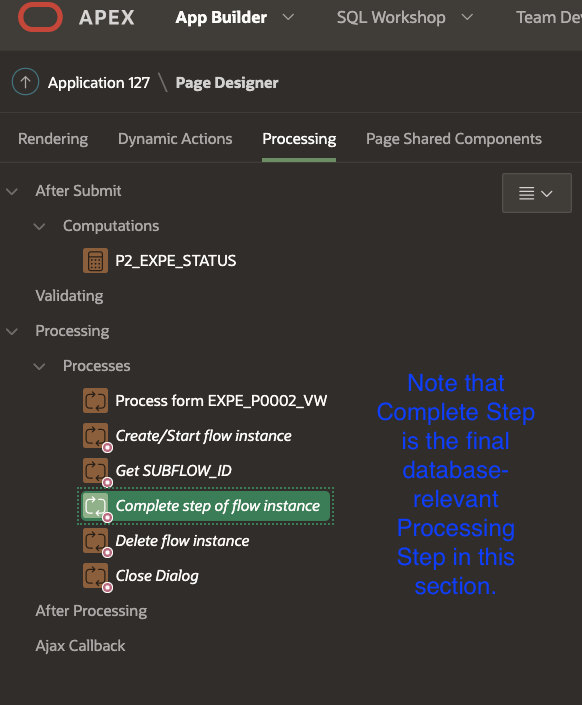 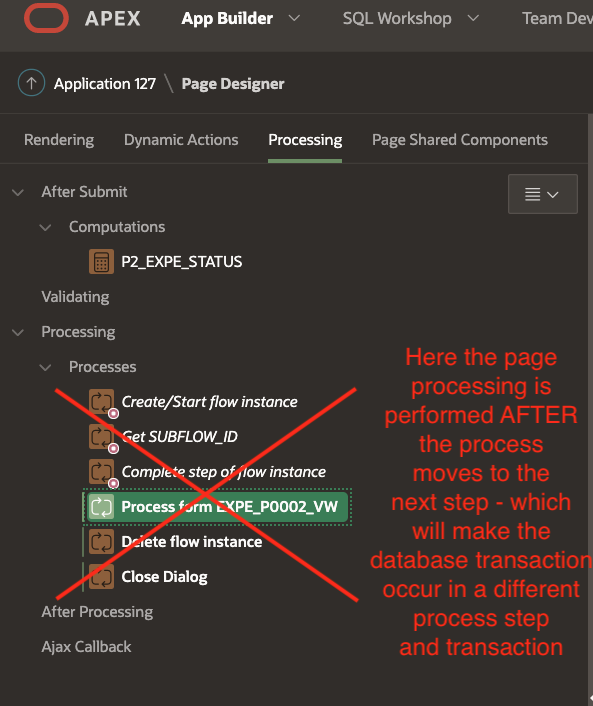 As a developer, you should avoid performing transactions that span process steps. Any work that needs to be performed as part of process step A needs to be performed BEFORE the process is told to move to step B. In practice, from APEX, this means that the call to flow_complete_step should be the final database-relevant step on page processing. The only processing tasks that should follow the flow_complete_step process step would be UI commands, such as, for example, ‘Refresh Page’.

But I really want to take control of my transactions…

If you have an advanced requirement, and want to take responsibility for transaction control yourself (not recommended unless you really know what you are doing…) you could wrap the calls to the Flows for APEX engine in your own autonomous transaction wrappers so that steps can commit separate from the underlying transaction. If you do this, you have to be very careful to handle any errors that occur, and understand where they will roll back to. If you think you need to do this, please talk to the Flows for APEX team.

How is this different to Flows for APEX v5 and earlier?

Prior to v21.1, the Flows for APEX engine would execute as many forward steps as it could, stopping when it reached either an asynchronous (waiting) task requiring user input, or hit an error. All of the processing would be inside the user’s current APEX transaction, which would be committed by APEX at the end of processing; any error inside the process would cause an error message to be presented to the user, and the entire transaction would be rolled back. When errors occurred in forward steps, this resulted, for example, in a user working on process step A being unable to complete step A because of an error in the following step B or Step C, which was being run automatically as a scriptTask.

In general, two (or more) users shouldn’t be completing the same step of a process at the same time, as only one will be able to perform the task and move the model forwards.

Applications should handle collision control by using the Reservation mechanism before a user starts work on their task, signaling to other users that they are working on a task.