The Timer sub-system requires additional database privileges and configuration, so you might need to configure your timer sub-system and check that it is working correctly if you have not used timers before on your system.

These can be set on a task, a userTask, or a subProcess. When this object becomes the current task, a timer is started. If the object is still the current object when the timer fires because it has not yet been completed, the underlying task is terminated, and the timer boundary event becomes the current object. It performs a task_complete on the boundary event, moving the process on to the next step. These are used to perform a business process timeout – the usual forward path is suspended, and replaced by the timeout process path. This can also be used to move a process on after a period closes or a review period has completed. Only one interrupting timer can be set on a single object. In the example below, task C has an attached interrupting timer. If task C is completed before the timer fires, the timer is removed. If the timer fires before C has completed, processing switches from the normal path and instead continues with C Timeout as the next task. 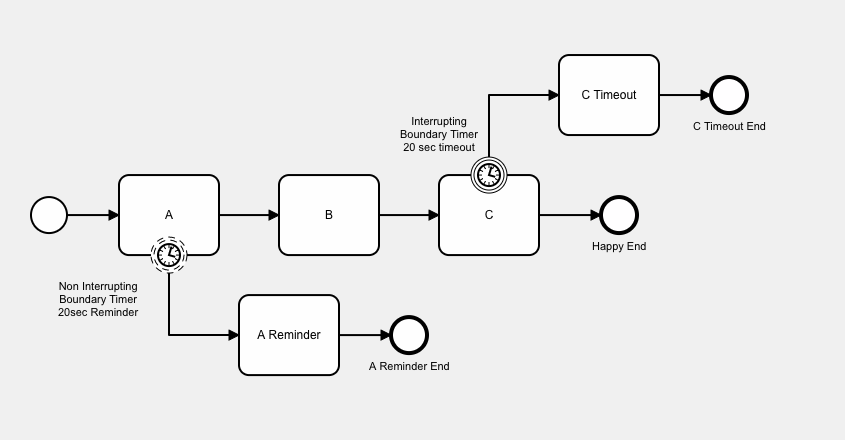 These can be set on a task, a userTask, or a subProcess. When this object becomes the current task, a timer is started. If the object is still the current object when the timer fires because it has not yet been completed, the underlying task continues, and a new subflow starts to operate in parallel to execute the ‘reminder’ path. The new ‘reminder path’ performs a task_complete on the boundary event, moving the process on to the first task on that path. Non-Interrupting Timer Boundary Events are used to implement reminder processes, or to start time-delayed parallel process paths. If the underlying task completes before the timer fires, the ‘reminder path’ timer and associated subflow are deleted. Multiple non-interrupting timer events can be set on a single task, userTask, or subProcess. In the example above, task A has one non-interrupting boundary timer attached to it. If task A is not completed in the given 20 seconds, the timer fires - which starts task ‘A Reminder’ on a parallel subflow to the main subflow.

To define a Timer Event, first drag the Event onto your new process canvas. Select the ‘Change Type’ spanner icon on the pop-up menu, and select Timer version of that from the menu. To then specify the Timer Configuration, use the Properties Panel on the right of the screen.

Under Timer, select the type of timer you want. Under Timer Definition, specific the required time or interval, as below. 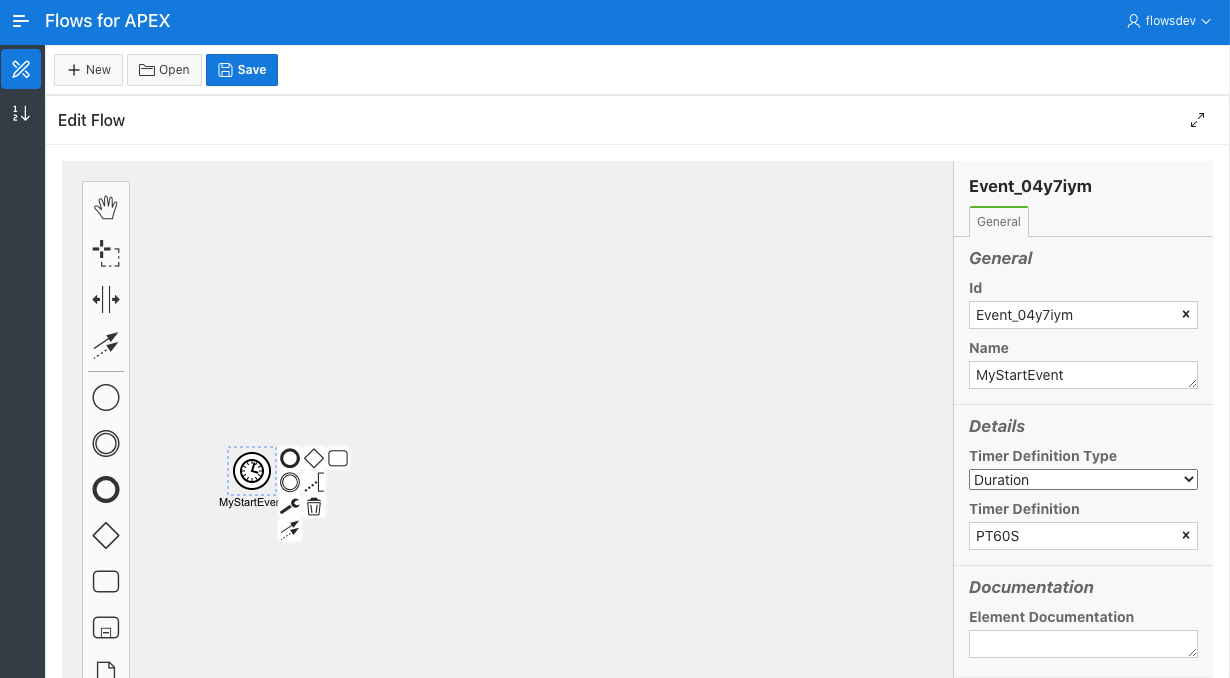 Starting in V5 (5.0.1), the timer definition defined in your process diagram can be a Flows for APEX process variable. This provides considerable process flexibility, especially with Date type timers.

For a Timer Definition Type ‘Date’, the process variable should be of type DATE.

For a Timer Definition Type of ‘Duration’ or ‘Cycle’, the process variable should be of type VARCHAR2.

In the following example, a scriptTask is used to calculate a process variable, nextClosePlus2D, which contains the date of the company’s next financial close plus 2 days. This variable is then used to set an Intermediate Timer Catch Event. The Timer on this event is set to fire at nextClosePlus2D. You can see how this has been specified on the Timer Definition, using the Flows for APEX process variable substitution syntax. 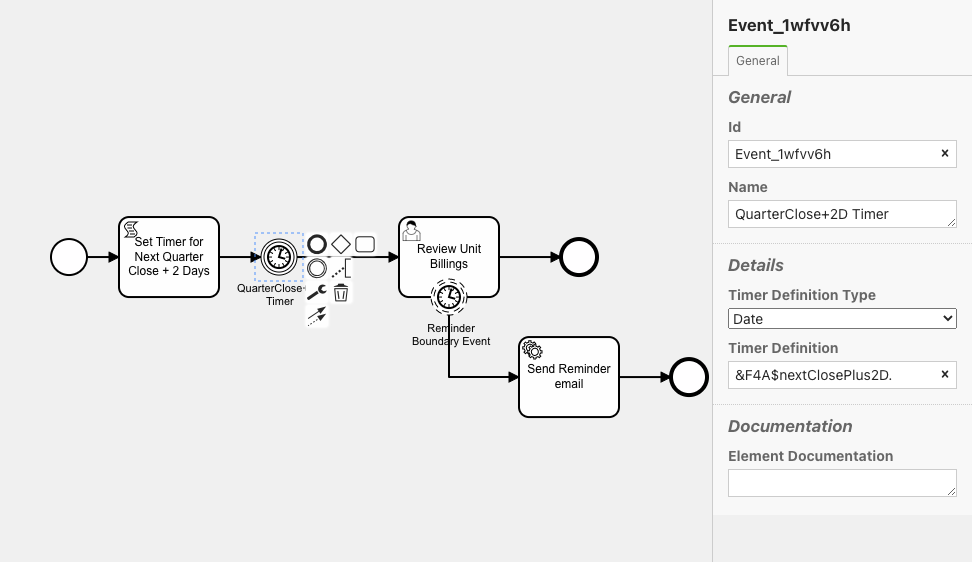 Just to keep the example going, our Review process, which is triggered by the Intermediate Timer Catch Event, itself has a non-interrupting timer boundary event set on it. This acts as a reminder, and is set to fire after a Duration has elapsed after the Review Event became the current task in the process. This has also been specified using a substitution variable - this time using the variable managerReminderPeriod. If this was, say, 2 days, the process variable managerReminderPeriod would be a varchar2 variable having the value P2D.