A BPMN Call Activity is used to call the process contained in a different diagram. 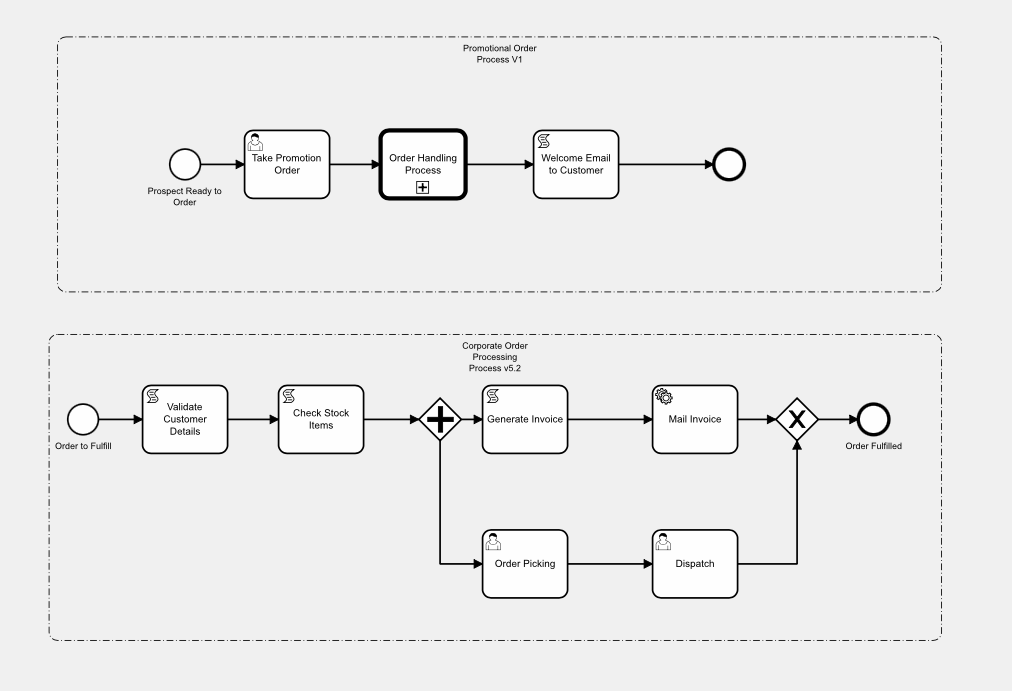 In this example, above, there is an existing process diagram for the order processing and fulfillment process (‘order to cash’). The Marketing department want to create a workflow-based application for a promotion that they are running, which targets a set of customers, makes them an offer, and then fulfils those orders. The process for this promotion has its own application for the promotion, and then it ‘drops’ any orders received into the standard ‘order-to-cash’ process. This is implemented by including a call activity into the promotion process, calling the ‘order-to-cash’ process.

Adding a CallActivity to your Process Model.

The BPMN Symbol for a Call Activity is shown above. To add a call activity, first add a standard task, then select the ‘spanner’ tool in the tool palette, and then change it to a call activity. 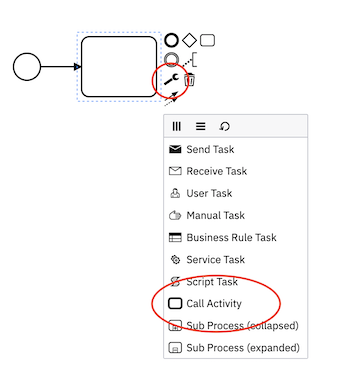 To configure a Call Activity, use the properties panel in the Flow Modeler. While setting parameters, the Flow Modeler can use meta-data already stored in Flows for APEX to set, for example, the model name or the required Input and Output Variables, or they can be entered manually. The Input Method pull down can be changed from Manual to ‘use mata-data’, as required.

The following properties need to be set: 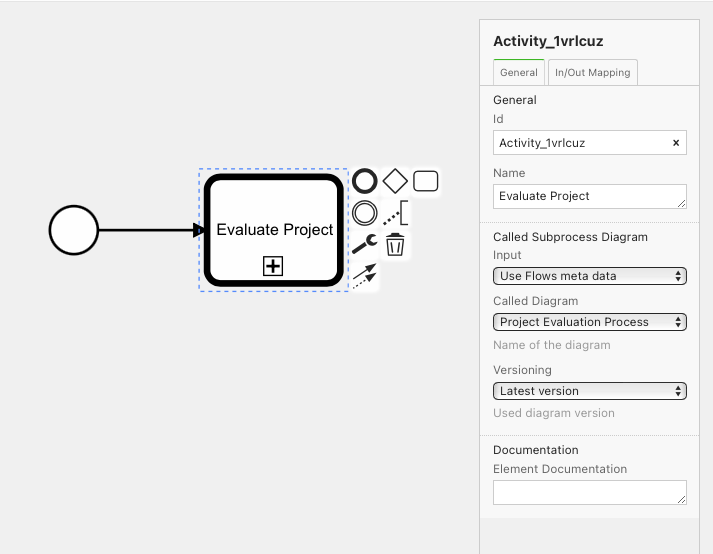 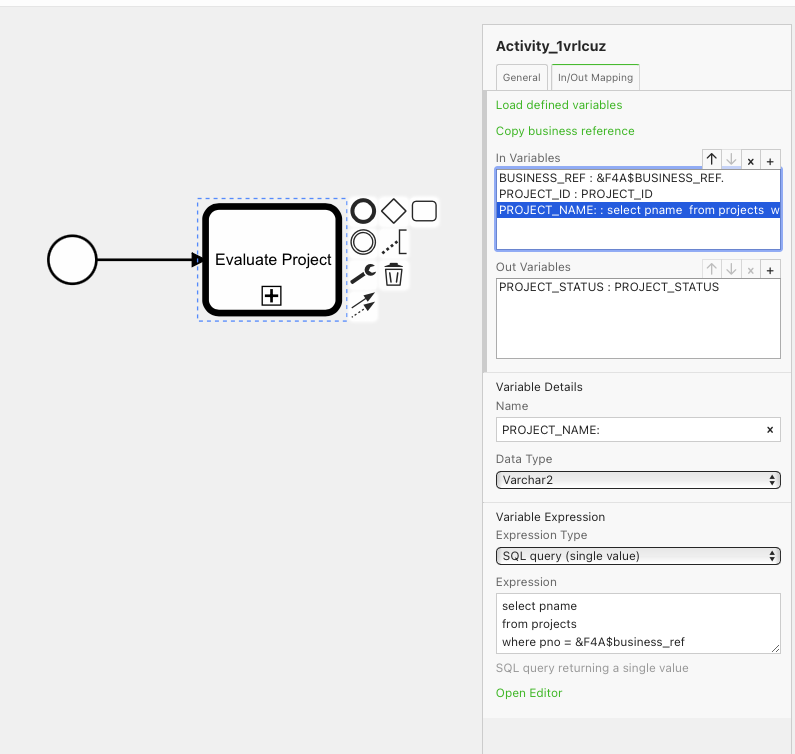 Process Variables are defined within the scope of a single diagram.

At runtime, and once a diagram has been called (entered) by a process instance, a diagram is given a scope. All process variables created in that diagram have that scope.

The scope of the initial diagram used by a process instance is always scope 0. The scopes of called diagrams are set to the subflow_id of the first subflow to operate in that diagram.

If you are not using Call Activities, all processes are running in their top level diagrams, all with scope = ‘0’, and you don’t need to worry about scope. If you are going to use Call Activities to next your diagrams, as a developer you need to be aware of and use variable scoping.

More information about Scope is contained in the Flows for APEX Concepts section, here. (link to be created).

Creating a Process Diagram that can be Called by Other Diagrams.

A Process Diagram should be able to be run as a process in its own right.

If you want to make a process diagram so that it can be called by a callActivity in another diagram, you should take the following steps with the called diagram: 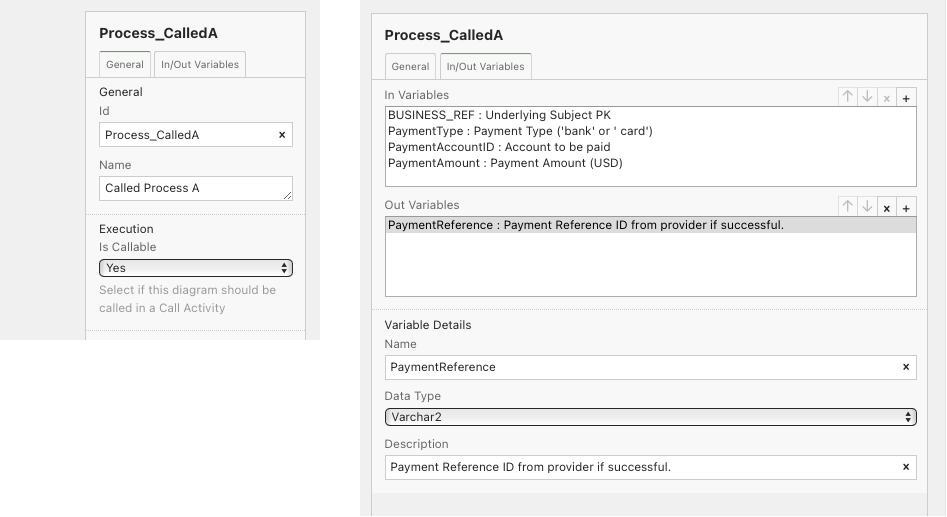 Diagrams can be nested in any arbitrary nesting structure of any complexity, proving that you do not create recursive loops, directly or indirectly. 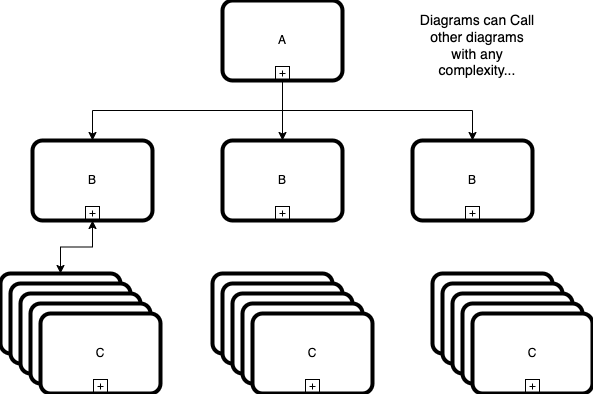 A Call Activity can have the following boundary events attached to it:

If the boundary event is interrupting and fires:

If the boundary event is non-interrupting and fires:

Some BPMN diagrams contain Collaboration and Participant information, i.e., they contain Lanes and Lanesets; other diagrams just contain a Process, without lane information.

Call Activities are able to handle called and calling diagrams with or without lanes.

If diagrams are nested in an arbitrary, complex fashion, these rules are applied from Calling to Called diagram at runtime, and are available through the task inbox view.

Note for Developers and Adminstrators on Resetting a Process Containing Call Activities.

Resetting a process instance with the flow_reset call resets a process instance back to its created state, ready to be started with flow_start. As previously documented, this is a convenience function on the API that is often useful during development, testing, and – very occasionally– during system administration. It is NOT designed to be used widely in production systems.

With a process that has Call Activities, instance creation builds a map of the process diagrams to be used, and the call structure of those diagrams for the new instance. This is stored in the FLOW_INSTANCE_DIAGRAMS table, with one row for each diagram call that will be made. Determination of which version of a diagram will be used for the instance is made at this time. As the process instance progesses, information about the diagram-level and variable scope to be used is added to this table when the diagram is called.

As a developer / administrator / tester, be aware that if you modify the diagrams or the callActivity nesting during administration or testing, you need to create a new process instance to get these changes! If you just reset an existing process instance, you return the instance to its previous created state and the call structure will not be updated. Remembering this will save you time and frustration!